Saved Searches Advanced Search
The Squamish Public Library is now offering Library Take-Out! Visit our website for more information.
If you have library items that you'd like to return to us, our book drop at the back of the library is open 24/7.
Print 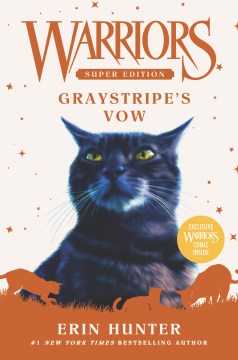 An epic stand-alone adventure in Erin Hunter's #1 nationally bestselling Warriors series! Also includes an exclusive ten-page Warriors comic. In this Super Edition, set during the events of The Broken Code, respected ThunderClan warrior Graystripe seeks a path to the Clan's future by returning to his past?and the Moonstone in the Clans' old forest territory. Graystripe served ThunderClan for many moons before retiring to the elders' den. As Firestar's most trusted friend and deputy, Graystripe promised that he would never abandon his home. But as new tensions strain ThunderClan, Graystripe will need to call on all of his long history, leaving ThunderClan behind in hopes of finding an answer that might save it. Join the legion of fans who have discovered the epic adventures, fierce warrior cats, and thrilling fantasy world of the mega-bestselling Warriors series. This stand-alone entry is perfect for new readers and dedicated fans alike.
Publisher: [S.I.] : HarperCollins, 2020
ISBN: 9780062963055
0062963058

Very awesome read! I really enjoyed this book and hope you will, too. Please read!!!!!

Best warrior book I've ever read! Makes me feel happy, and very few books give me that wonderful sensation! If you like a lesson, there's one in this: Not everything can go wrong, especially with friends! I recommend lonely people to read it every day, for happiness.

Though I LOVED THIS BOOK I almost cried once, but it was all good I give this book a good rating :)

i really want the book but a long wait list

I really liked this book.

I have not read this book yet but it seems soooooooooooooo exiting!

I can't wait for this book to come out!

"Dark ages could be evil, but only brightness can overcome them." -Graystripe's Vow

""And we'll look out for you," Monkeystar responded, dipping her head respectfully. "And meanwhile, may StarClan . . . watch you paws?"
"Nearly right." Graystripe made a massive effort to hide his amusement. "Warriors say, 'May StarClan light your path.' And may they light yours also, cats of WarriorClan."" - Graystripe's Vow

"It's been almost a moon since Graystripe left. I can't help but miss him . . . plus I wish he could be here to see how we're all doing. Our numbers have grown so much - I think he'd be proud. Though he'd be prouder still if Bugeater could ever learn to stalk prey without making noise. "
"WHUMP!" - Graystripe's Vow

"When he came to the rim of the hollow, Firestar raised his tail for his Clan to halt. For a moment he stood still, gazing down into the meeting place. Looking over his shoulder, Graystripe say the massed assembly of cats at the bottom, every one of them turning to stare. Their eyes gleamed as if the moonlight were reflected from countless tiny pools. From their position on the Great Rock, Tallstar, Blackstar and Lepardstar broke of their conversation and stood rigid.
"Haven't they ever seen a cat before?" Firestar muttered.
Graystripe stifled a snort of amusement. " - Graystripe's Vow

"Take it easy. We haven't come home to get squashed." - Firestar

The Tribe of Endless Hunting sounds just like StarClan. Neither of them can give a cat a straight answer." - Graystripe

"Do you think we haven't been trying? What do you expect me to do? Fly up to the stars and drag them down by their tails?" - Jayfeather

There are no age suitabilities for this title yet.

There are no summaries for this title yet.